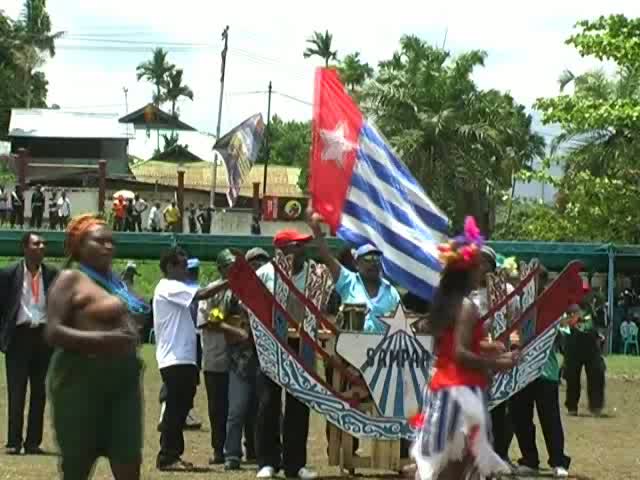 full translation by TAPOL of the report received from KPKC, Synod of GKI, Indonesian
Christian Church on 21 October 2011

The Third Papuan Congress was held from 17 October and attended by Papuans from
across the territory of Papua. After facing difficulties regarding the venue, the Congress
was held in the Zakheus Tunas Harapan Padang field.
On 19 October, Prokorus [normally spelt Forkorus] Yaboisembut was elected President
of West Papua, and the evangelist Edison G. Waromi was elected Prime Minister.
Following the elections, Prokorus Yaboisembut read out the Declaration of a new
state—the Federal State of West Papua, the symbol of the state—the Mambruk Bird, the
currency—the guilder, the national anthem—Hai Tanahku Papua, the national
languages—Pidgin, Indonesian Malay, Papuan languages, and English, and the
geographic territory.
The Declaration stated: “On this day, 19 October 2011, we proclaim the full
independence and sovereignty of our state, and therefore the State of Indonesia must
speedily end its occupation of Papua. All components of the leadership elected at the
Third Papuan People’s Congress shall immediately discuss the basic principles of the
State of West Papua”.
Selpius Bobii, the Chairman of the Third Papuan People’s Congress, declared “We, the
people of West Papua, in this highest forum declare that the proclamation of the Papuan
National Committee on 19 October 1961, which now marks its fiftieth anniversary, was
a time when the Papuan people lived freely, during the era of the Dutch/UNTEA, and we
want to return to the sovereignty which once existed.”
The declaration of the Papuan Congress is as follows:
1. The restoration of the Independence and Sovereignty of the Papuan people in the state
of West Papua.
2. On this day, 19 October 2011, we, the Papuan people, declare our complete
Independence and Sovereignty in the state of West Papua.
3. The establishment and enactment of the Constitution of the State of West Papua.
4. The formation of the Government of West Papua shall come into being from the
moment of the adoption of the Constitution on 19 October 2011.
5. The Indonesian government must quickly end its occupation from the moment of the
adoption of the Constitution on 19 October 2011.
6. The Secretary-General of the United Nations and members of the UN, in particular
the US and Indonesian Governments, to recognise and regularise governmental powers
within the shortest possible time, and register the state of West Papua as a member of the
UN in order to uphold the basic principles of human rights and democracy.
7. We issue the International Parliamentarians for West Papua and International
Lawyers for West Papua, as well as supportive countries, with a mandate to advocate
matters concerning the annexation of sovereignty and independence of the Papuan
people, and to follow this up through lawful international mechanisms at the
International Court, until such time as the full and complete transfer of power from the
Unitary State of the Republic of Indonesia to the Federal Government of West Papua.
8. In the name of the Papuan people in the state of West Papua, the adoption of the
Declaration of Decision No. 0012/03/10-2011 by the Third Papuan Congress takes
cognisance of the views of the West Papuan people set forth in the reports of the
commissions during the Third Papuan Congress.
Note: According to the observations of the KPKC of the GKI Synod, the location of the
Third Papuan Congress was heavily guarded by troops of the Indonesian Army and
Police, including six armed vehicles and trucks.