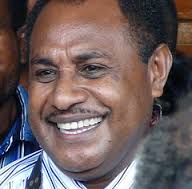 For more than fifty years the indigenous Melanesians in their own homeland in West
Papua have experienced the political realities of being part of the Republic of
Indonesia. The integration of West Papua into Indonesia through the annexation of its
territory gave rise to political conflict and and the deprivation of political rights.
The international community needs to be aware that the people of West Papua have
experienced the silencing of democracy, their right to freedom of expression in
politics, social rights, economy and culture.
The evidence that democracy is silenced is that as the appointed Prime Minister of the
Federal Republic of West Papua I have been sentenced to three years in prison in an
Indonesian jail. I have been imprisoned on a number of other occasions over the years
for expressing my political views.
Therefore from behind the iron bars of an Indonesian prison in Abepura, I wish to
state that :
1.
I fully support the campaign to liberate West Papua political prisoners in all
regions of the Republic of Indonesia and for their release to be unconditional.
2 .
I urge the United Nations to prioritise West Papua on its agenda and mediate
the political status of West Papua between Indonesia and West Papua. This matter
was addressed recently in a speech at the UN Human Rights Council on March 4,
2014 in Geneva, Switzerland by the Honorable Prime Minister of Vanuatu Mr. Moana
Carcasses Kalosil.
3 .
I appeal to Amnesty International, Human Rights Watch (HRW) and TAPOL
to conduct investigations into human rights violations in West Papua.
4 .
I urge the Republic of Indonesia to conduct talks and negotiation with the
Federal Republic of West Papua mediated by the UN in 2014.
5 .
I outrightly reject the so-called Autonomy Plus and other policies imposed
upon the people and the land of Papua.
6 .
I request international solidarity and intervention over the humanitarian crisis,
– not just sympathy but real action to end the Republic of Indonesia’s colonial
occupation of West Papua.
Edison Waromi, SH
Abepura Prison