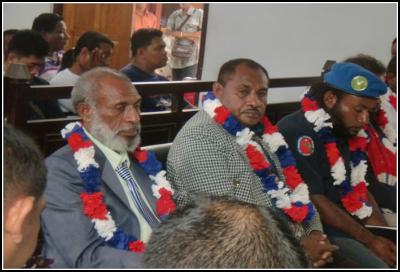 It is with great expectation that we learn that a most distinguished delegation where under your selves will visit Jakarta from March 19 until March 21 at the occasion of the next coming Jakarta International Defense Dialogue.

The undersigned Forkorus Yaboisembut and Edison Waromi take the opportunity of this next coming visit to address in their personal name as well as on behalf of the West Papuan people the present Open Letter to the World leaders.

The undersigned both being in jail, they address by this Open Letter a cry for obtaining the so-needed special attention of the world leaders, especially since instructions were given by the Indonesian authorities (on the date of 9 February, 2012, at 10am, in the Ashton Hotel Papua in Jayapura, in the presence of Indonesian Army chiefs, Police chiefs, the Governor of Papua, Policy Information Services, BIN, BAIS, BMP and others), in order not to refrain from violating Human Rights in the framework of the ongoing process for treason against both undersigned. Also, the message was given by officials to the judges present at that meeting of 9 February, 2012, to give no room for any defense to the defendants and lawyers of the undersigned for the defense of their case.
Being without any normal legal defense as should be allowed, this Open Letter goes beyond the only matter of Human Rights and self-determination for the West-Papuan people.

It is the very hope of the West Papuan people and the undersigned that the honorable delegation at the Jakarta International Defense Dialog will not turn around and no longer ignore the major problems West Papua is facing due to the absence since decennia of a fair and democratic approach of handling Human Rights and rights to self-determination towards West Papua, as well as a fair repartition of wealth towards West Papua (see infra).

It must unfortunately be said that the successive Indonesian regimes and their successive Governments have never been politically prepared to give fair chances for introducing human rights, democracy and self-determination to West Papua.
The Indonesian regimes and their successive Governments have totally neglected and continue to neglect the under the rules of international public law most respectable and fundamental aspirations of the West Papuan people to their basic rights which are fully consistent with the Universal Declaration of Human Rights and other applicable instruments in the field of Human Rights law.

The political motivations of the undersigned are only those directly related to basic Human Rights and those protected by the International Covenant on Civil and Political Rights, adopted by the United Nations General Assembly held in New York on 16 December 1966 which became into force on 23 March 1976, and to which the Republic of Indonesia acceded on 23 February 2006.

The undersigned act in good faith in accordance with the principles of Human Rights, and nothing in the present Open Letter stands contrary to the provisions of the United Nations Charter.

Hereunder follows a non-exhaustive list of several aspects of violations of Human Rights occurred, ongoing and/or with a high risk of re-occurring:

For the sake of good order and comprehension follows here a recapitulation of the history and situation of generalized violations of Human Rights by Indonesia towards West Papua, and the denial of self-determination for West Papua by Indonesia.

The undersigned apply for all appropriate further actions by the world leaders at the occasion of the from March 19 until March 21 Jakarta International Defense Dialog, and their recognition that the West Papuan situation must be resolved in accordance with all the West Papuan rights to self-determination as well as Human Rights, without any exception whatsoever.
The undersigned confirm their wish to re-establish normal speaking terms with Indonesia, and make workable a new modus vivendi for the future and welfare of West Papua and its people, as well as all of the stakeholders of its economic actors.

In this framework the undersigned aim to be directly involved in the announced renegotiations of mine-, gas-, and oil contracts recently cited as political priority by the competent Minister of Energy, his Excellency Jero Wacik.

For the whole of this subject of renegotiations of mine-, gas-, and oil contracts, the undersigned aim for starting urgently a neutral audit by a reputed international audit firm they will choice for an examination in depth of the application that was given regarding the 70 to 80% repartition of wealth as part of the Autonomy Act since 2001.

The undersigned do hope that indeed their action may lead to a better re-distribution of wealth, and more prosperity to all stakeholders, at all levels, in total conformity with international private and public law.
In that sense the undersigned have asked to the ILO in Geneva for assisting them in order to establish well regulated labor organizations under UN norms.
Also, the undersigned are delighted to learn about a revival of economic interest in the region, and the visit of entrepreneurs of the private sector. The undersigned aim to be associated and to actively take part to the discussions in that matter.

The undersigned do hope that in agreement with the World leaders, the Presidency, Vice-Presidency, and the entire Government of Indonesia, one may enter into most prosperous relations between parties for all of the issues mentioned above.